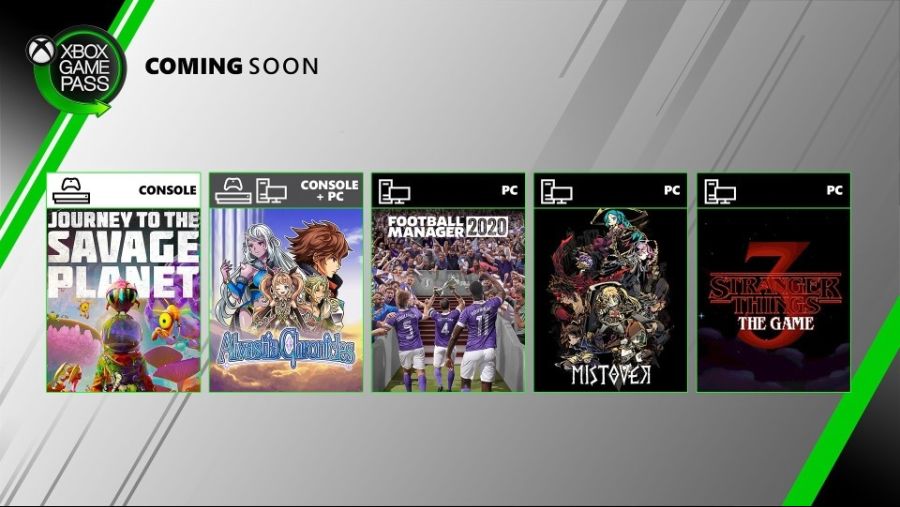 Overcooked! 2 (ID@Xbox) – Available Now
Overcooked  returns with a brand-new helping of chaotic cooking action! Journey  back to the Onion Kingdom and assemble your team of chefs in classic  couch co-op or online play for up to four players. Hold onto your aprons  … it’s time to save the world (again!)

Football Manager 2020 – Coming Soon
Every  decision counts. With new features and polished game mechanics which  reward long-term planning and progression like never before, empower  managers to develop both your club’s culture and your youth team’s  prospects, as well as your own unique managerial identity.

Alvastia Chronicles (ID@Xbox) – Coming Soon
Engage  in heated turn-based battles, upgrade your weapons, fight in a battle  arena, and embark on epic quests in this retro-styled JRPG. Guide  siblings Alan and Elmia as they start their journey to avenge their  parents’ deaths, fighting to stem the tide of monsters flooding into the  world, and restore peace to Alvastia.

Mistover (ID@Xbox) – Coming Soon
A  ”Mist-ical’ RPG with expeditions for finding the key to survival. Choose  your next step wisely and keep in mind that your every move will change  the future. Create your own ‘Corps’ and explore through various regions  in the Pillar of Despair: forests, lakes, mountains, cities,  cathedrals, castles, and much more.